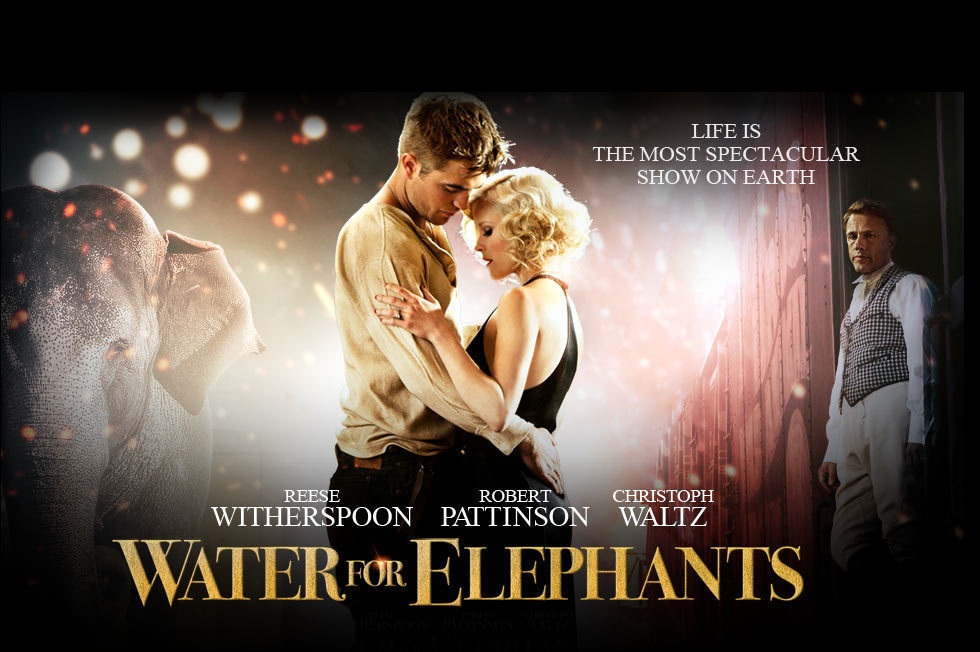 But first read the book… (I say quite confidently knowing full well that I missed my self-imposed cut-off by about 50 pages before going to watch the movie. Oh dear!)

Anyway… Let me tell you about it real quick.

The story takes the form of a “ninety or ninety-three” year old man’s vivid reminiscences of his big and bold life as a circus vet during America’s depression-ravaged 1930s.

Tucked away in an old-age home somewhere in the heart of the country, Jacob Jankowski’s (Hal Holbrook) emotionally-charged trip down memory lane is sparked by the wafting scents of candy floss, popcorn, and roasted peanuts, as well as the exciting site of a massive magenta-and-white-striped big top tent, as a travelling circus troupe rolls into town.

What unfolds is a larger than life tale of loss, love, destiny, friendship, tragedy and adventure – in no particular order – all centered around the fantastical world of the Benzini Bros. Circus. . . and the spine-chilling disaster that would finally bring “the most spectacular show on earth” to an end.

Although the book (and the movie) is rife with all kinds of fascinating characters*, the plot is largely driven by the dangerous love triangle that young Jacob (Robert Pattinson) finds himself entangled in when he starts developing feelings for a beautiful, but haughty performer called Marlena (Reese Witherspoon) who also happens to be the wife of the circus’ charismatic, but creepy ring master, August (Christoph Waltz).

Their forbidden love culminates in a massive blow-up that’s hinted at throughout the story, but only unravels in its full, nail-biting glory right at the very end… executed masterfully by Sara Gruen in the novel and excellently by Francis Lawrence in the movie.

With a tagline like “Life is the most spectacular show on earth” it’s no surprise that this tantalizing tale will keep you riveted to your seat and leave you dreaming of finding your very own circus train… or at least having it find you.

Take note that my review/description is based heavily on the novel, but much of it applies to the movie as well.

I don’t know if i picked that circus but something told me that circus picked me. – Old Jacob

Wise Words: A Collection of Quotes from John Muir

Career advice from a Fab Academic

“To live content with small means.
Hello Hamari Gold!
A few snaps from Route 62 SolarFarm, a beautiful pet-friendly stay outside Montagu.
May your drinks be pretty and your garden green.
The biggest, fluffiest carrot Violet the donkey ever did see.
💫🦄💫